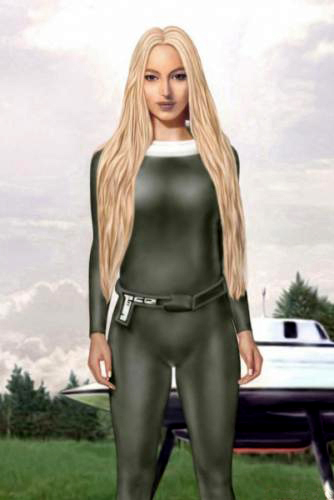 Semjase is the name of a woman from the planet Erra in the Pleiades, who is part of the Galactic Federation. In the beginning of her mission she gave Meier education in the sprirtual philosophy they use on Erra. She also instructed Meier in taking pictures of several Erranian spacecrafts, he should publish to the Earth population. She also gave him metal samples for Earth scientists to analyze. The Erranians tried during the seventies to establish an alternative society in Switzerland built after the Erranian model. This try was unsuccessful because of internal power struggle within the Swiss group. It went that far, so the Erranians broke the contact with Meier in 1977. Meier then invented a story about Semjase injured her head in a accident at the centre in Switzerland, because she was frightened by a person. This resulted later in Meier was injured in the same way in 1982 by karmic mechanisms. Semjase has karmic protection so the energy of that lie reflected back on Meier. After this event, Meier was contacted by negative extraterrestrals who work with the NWO cabal and Earth secret services. This groups are feeding him with negative information, which can be read from his latest reports. They also produced fake UFO images with the intention to discredit Meier. He became aware of this situation later. The Man In Black then threatened him by abducting his entire family if he tells the truth. The original Erranien group can’t help him in this situation, because it has occurred from a choose Meier himself did. According to rules the Erranians feel themselves bounded by,  they see an rescue action toward Meier now will violate the principle of the free will. Semjase feels sad and is very sorry when she thinks about the present situation Meier is in. It has been decided in a council meeting that the original Erranien group is not allowed to interfere with Meier now, and they can’t go against that decision.

After the time with Meier, Semjase has done several other things for The Galactic Federation. She had sporadic physical contacts with 2 persons in the USA and with a person in Sweeden among others. Semjase and several other Erranians has initiated cooperation with a group in Norway they now have telepathically contacts with.


I am a close friend of Billy Meier and have read enough of the rubbish about him on this website so will openly tell you the way it is for him right now. He has confided in me everything that is taking place in his life. Billy Meier's family was threatened, his original pictures and documents were taken years ago, there were attempts made on his life and someone even went as far as to publish fake pictures in replacement of the originals so nobody would believe his story.

These rubbish recreated duplicates were purposely published with some of his collection in order to discredit him, they want you to believe he was after money and made everything up which was never true NO not true at all. Billy Meier is no longer able to openly discuss his contacts of the Pleiadians, he is being continually monitored and watched over closely all the time. His entire family will be taken if he goes against the orders of these men, I will tell you he told me these people were also extraterrestrials and looked human but were not.


He has told me these people have made attempts on his life and finally planted false information and rubbish pictures, they forced Billy Meier to go along with people to publish his books and made him go along with this rubbish scam or else his children and everyone he loved would be taken. Whoever these people are Billy made it clear that he had no choice in the matter and has gone along with everything they have told him to do.

It saddens me to hear all the negative comments made about my good friend Billy, people do not know his situation and he is a good hearted man but I can understand now how these people have succeeded in making Billy out to be a liar. From reading the internet stories and the published rubbish books most people believe he has hoaxed the world, these people have succeeded and some of the very collection that was published were authentic the other half are fakes but they could not hide those genuine pictures because he already put them in the public for many years but they still have succeeded and purposely faked most of them so all will disbelieve. I can't prove this because this would get him and me into deeper trouble if I was to prove to the world what I am saying, but I have left this out for those of you wondering.

Billy has confided in me that his extraterrestrial contacts semjase in particular told him many years ago that the day would come that people would take over his life, he knew this day would come and it has. These people will go any length and distance to keep the truth from the public and because of the great many believers in Billy Meiers case from years ago this is why they have overtaken him and succeeded to make him into nothing but a shame and rubbish hoaxer. So now you know the truth, let it be said and let it be written.